Posted at 09:55h in Health by Olly Du Croz
Share

Having injured his spine while working in India, Bhakta returned to Nepal after a brief stay in hospital, with no rehabilitation, support or advice.

He recalls those early days as worse than he could ever have imagined: “I was fully dependent on others and having problems with bowel and bladder incontinence. The mental pain was killing me from inside. I was seriously worried and depressed thinking about the future of my two small children.” 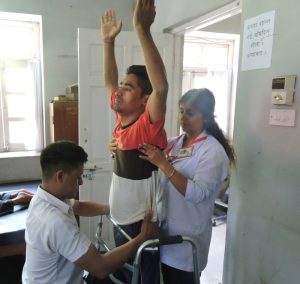 Bhakta heard about Shining Hospital Surkhet and asked for help. He was admitted and thanks to the hospital’s unique rehabilitation project, found himself healing inside and out.

“The therapy and recreational activities, group exercises and games added more of inner joy in my life,” he explained. With extensive treatment and physiotherapy, Bhakta found some of the sensation in his legs was returning. He was discharged from hospital with a walker, wheelchair, mattress, toilet chair and protective shoes.

Combined with the support, advice and therapy he’d received, these aids helped him live more independently again. Surkhet’s community-based rehabilitation team have visited him at home, helping to modify his toilet and ensure the family can earn a living.

Bhakta says: “Nowadays my days are good. I help my children with their homework. My wife looks after goats funded by INF.”

Follow-up treatment at Shining Hospital Surkhet has given Bhakta hope of becoming fully independent again. “Now I can stand with the walker and there is more improvement in balance and coordination. I am very thankful to the whole INF team.”

The unique rehabilitation service at Shining Hospital Surkhet helps people across western Nepal, thanks to the support of people like you.