Posted at 16:45h in Disaster by Olly Du Croz
Share

On 31st March 2019, people living in the Bara and Parsa districts were hit by heavy winds as Nepal recorded its first ever tornado.

Nearly 2,500 houses were destroyed or damaged, with 27 people killed and another 450 injured. 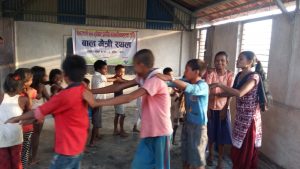 We partnered with ACN (the social action arm of the Pokhara Christian Community) in their response to the disaster. Local Christian leaders in Bara and Parsa were quickly mobilised to help the thousands of people affected by this incident.

A small community of Dom (considered the lowest even among the Dalit caste) had not received any help, so ACN provided food and other supplies to last them up to three weeks.

Other survivors were concerned about having no means to cook food, so 117 households were given small gas cylinders with in-built stoves. Water filters were also provided for people who were at high risk of disease due to contaminated water supplies.

Follow-up response over the next few months also included psychological support for those affected by trauma, school uniforms for more than 500 children, plus baby kits and nutrition packs for 350 new and pregnant mothers.

Help our partners respond to other natural disasters in Nepal

Nepal is prone to regular natural disasters such as landslides and flooding, as well as earthquakes and unusual events such as this tornado. Thanks to your support we stand ready to help in times of need.