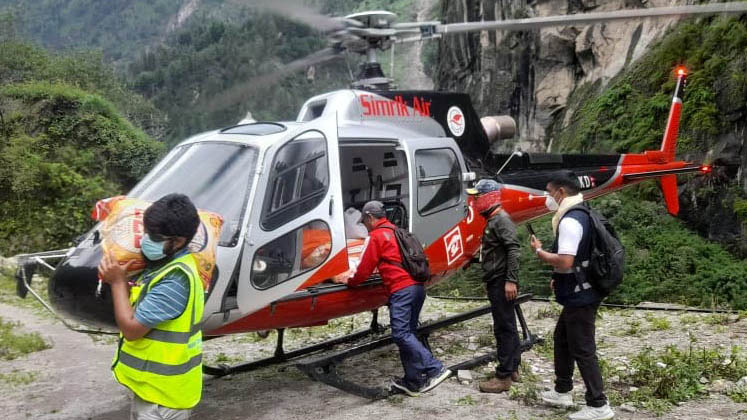 With Nepal still reeling from the devastation caused by Covid, floods and landslides are now destroying homes, communities and livelihoods in many districts.

The trauma many families are having to endure is heart-breaking.

Monsoon season in Nepal has come early in 2021.

All 11 districts of the western Gandaki province are affected by floods or landslides. Incidents have also been reported in far-western INF working areas, such as Kalikot and Bajura.

Manang is one of the worst affected areas, with at least 200 houses submerged. Two churches, schools, bridges and electricity wires have also been swept away – leaving many remaining homes inaccessible and without power. People’s distress is amplified by the fact that Manang ordinarily receives the least amount of rain of any district in Nepal.

Our partners are already responding to help 800 of the most vulnerable people – emergency food and medicine supplies are being flown in by helicopter as many roads are blocked.

Beyond this initial help for people in Manang, a collaborative effort including Asal Chhimekee Nepal, INF Nepal, and the Pokhara Christian Community is also co-ordinating relief and recovery plans in several other districts.

£20 could provide a mattress and blanket

With your help, our partners can keep people safe, fed, and healthy as they recover and rebuild their lives from the devastation caused by this year’s monsoon.