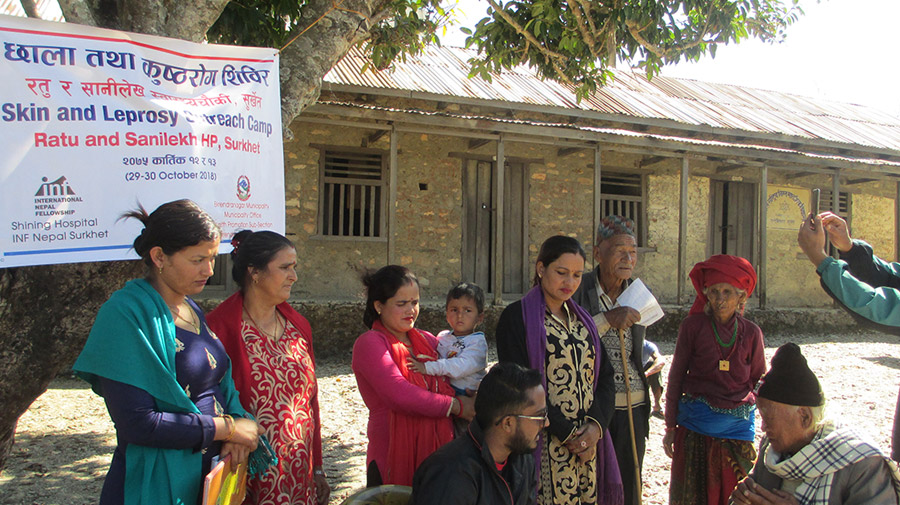 Early diagnosis not only helps individuals recover fully, but also minimises the risk of the disease spreading. Thanks to generous contributions to our September leprosy appeal, we’ve already been able to host four separate events with this goal in mind.

We held a skin outreach camp last week (28 – 30 October) in Surkhet, attended by 123 people from at least three generations of local families. The vast majority of attendees were adults aged between 18 and 60 – but 44 boys and girls plus a handful of over-60s also took advantage of the team’s expertise.

Designed to raise awareness and detect new cases of the disease, the camps are for anyone concerned that they may have contracted the bacillus that causes leprosy. They are a crucial part of our work to diagnose, treat and ultimately eradicate the disease.

We also want to equip more healthcare workers to detect, diagnose and treat leprosy quickly and effectively. So during September and October we held training sessions for government staff at our Shining Hospital in Surkhet.

More than 30 government health workers from a dozen different districts took part in this INF-funded training. It was facilitated by our own experienced laboratory technicians and qualified Nepalese government staff from the Directorate of Health in Karnali Province.

With three sessions in total covering two topics, the training was designed to upskill the frontline healthcare staff who examine patients and the laboratory staff responsible for diagnostic tests and microscopic analysis of skin samples.

As a result of the training, the seven laboratory technicians, nine laboratory assistants and 15 healthcare staff who attended all felt more confident in diagnosing leprosy and treating it.

Pre-test scores for healthcare staff attending the two-day basic leprosy training module averaged 37%. After the training they achieved average scores of nearly 90%. The training module for laboratory staff, which focused on using skin biopsies to obtain positive diagnoses, saw a similar improvement. Average scores prior to training were 25%, increasing to an impressive 85% following the sessions.

Thank you for helping us stop leprosy in its tracks.

If you’d like to contribute to this crucial work, you can either donate to our leprosy appeal to support someone affected by the disease.