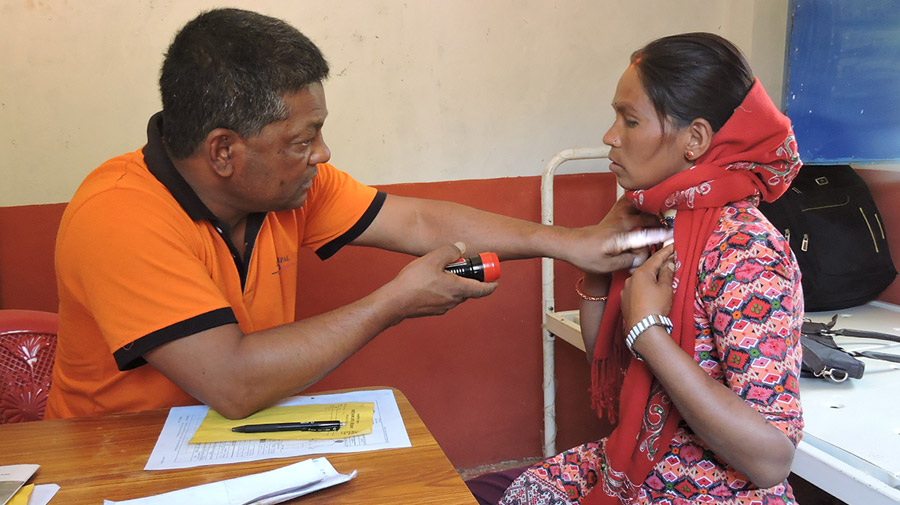 Training, awareness and treatment at outreach camps for leprosy

From 7 to 11 April 2019 nearly 500 men, women and children from remote areas of western Nepal attended outreach camps designed to detect and treat leprosy. The camps aim to prevent longer-term complications such as amputation and disability, and reduce the risk of the disease spreading. They were run by staff from INF’s Shining Hospital Surkhet, as part of a larger project to improve the accuracy and speed of leprosy diagnosis in Nepal. The hospital’s long history in treating leprosy patients – and its new vision to provide the best possible holistic care for people at risk of or living with disabilities – makes it well placed to deliver this specialist training and treatment.

Detecting those at risk and referring them to leprosy camps

Over their five-day duration, the camps focused first on the female community health volunteers based at four health posts in western Nepal. 37 volunteers undertook training, which updated their knowledge of what to look for when examining people for early signs of leprosy. Armed with this knowledge, they made door-to-door visits in their communities, referring suspected cases of leprosy to the camps that were due to take place over the following four days.
Specialists on hand at leprosy camps

Clinicians from INF’s Shining Hospital Surkhet and the local health posts met with the men, woman and children who had been referred. More than 220 people attended the first two-day camp in Bankharka; a further 273 people were seen at another two-day camp in nearby Rakam, also located within the Simpa Rural Municipality of Nepal.

INF interventions have a positive impact

There were just two cases of leprosy confirmed across both camps; a sign that INF’s interventions, funded by UK supporters as part of this three-year project, are having a positive impact. Other attendees were referred for follow-up checks and others, already dealing with a diagnosis of leprosy, attended the camps for support, advice and treatment.

To help us keep striving towards a Nepal free from leprosy, please donate to our ‘stop leprosy’ appeal.

We use cookies to ensure we give you the best experience on our website - Find out more.