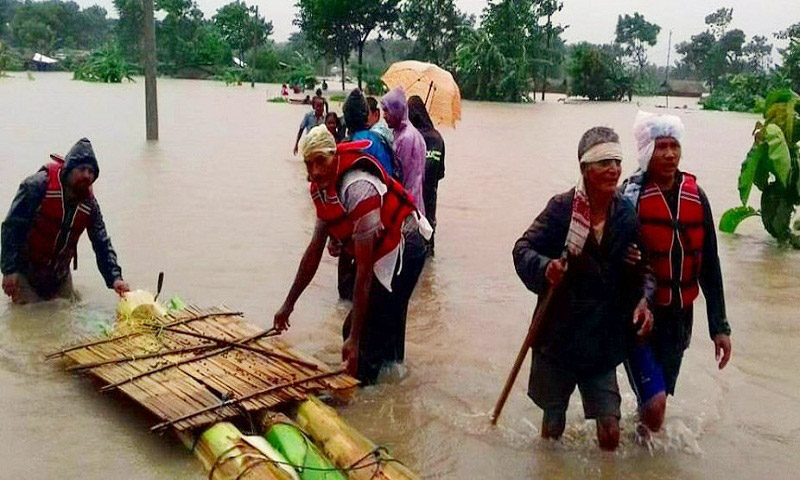 When the 2019 monsoon season arrived in mid-July, causing devastation across 28 of Nepal’s districts, our partners in Nepal worked tirelessly to help those affected.

The summer’s monsoon rains triggered landslides and widespread flooding that claimed lives and destroyed homes and livelihoods. UK supporters gave generously in response to the emergency appeal that we launched towards the end of July.

Thousands of families, mainly in the Bara, Parsa and Rautahat regions, were badly affected. Thanks to the INF Disaster Relief Fund, our partners ACN were able to respond immediately, visiting the most vulnerable families straight away and distributing vital supplies such as rice and lentils, soap, sanitary pads, blankets, tents and mosquito nets. Within a very short space of time, hundreds of households made homeless by the floods had food, shelter and crucial hygiene supplies.

Donations in excess of £26,000 in response to our Nepal floods appeal meant that ACN could reach more communities affected by flooding. They hoped to help 1,000 households, offering not only food and shelter during the initial relief phase, but also installing better systems for collecting clean water and training community leaders to plan and respond to future disasters.

Thanks to donors’ generosity, by the middle of September 2019 ACN had reached 1152 families – around 8,000 people – in four separate visits to the worst-affected areas. The team listened to the local community’s needs and installed five tube wells in the Rajdevi ward of the Rautahat district, where 85 households had previously had access to just one tube well. Comprising a long tube bored into the ground and sunk to the depth of the water table, tube wells offer a fast, effective and long-term solution to sanitation problems, especially in the aftermath of floods.

Planning ahead – being prepared

Part of ACN’s work is to help communities at risk prepare for the future. Facilitators from the Armed Police Force and the Red Cross Society trained 85 participants, from communities facing the greatest threat of flooding, in disaster planning, evacuation, search and rescue and first aid techniques.

INF’s Disaster Relief Fund means our partners in Nepal can respond immediately and save lives following a natural disaster.

Find out more below or donate to the fund.